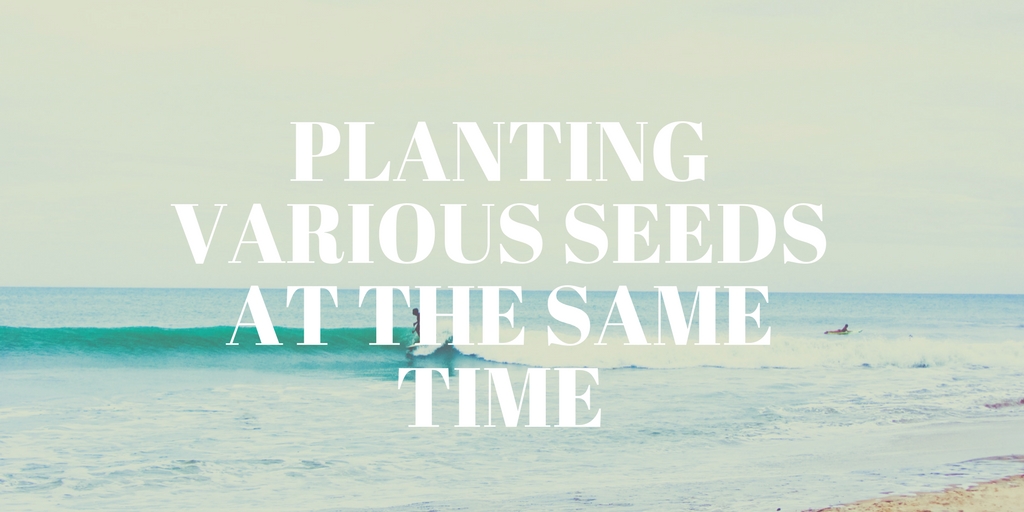 Just like a lot of smart farmers who know that they have to sow many seeds at the same time, wise internet marketers should adopt the same strategy.

To clearly illustrate this point, let me tell you my story. My e-commerce site made its first official sale in October of 2006 and finished 2008 with over $200,000 in revenues for the year. I am convinced that even if it is making money for me, I still have a lot of changes I wanted to do for the site. Nevertheless, that is a site that brings me a regular six figures of income. I got nothing to complain.

Looking back, while the site is doing well, there are a couple of things I’d really do another way if I could go back to two years ago when I started.

Today I’ll share one with you. If there is a single biggest blunder I made with my e-commerce site, it is the fact that I only started one.

I guess this isn’t really a mistake with the site itself, but it’s a mistake I made with my general internet income goals. Only starting one site had two major consequences:

1. I had all my plans, hopes, and dreams riding on one site. This set me up to be discouraged and frustrated when the site wasn’t making me rich overnight, even though it was growing steadily. You’ll always be discouraged if you attach your goals and dreams to a site that can never deliver what you want – at least not all by itself.

2. I moved too slowly. A big part of success online is just sitting around and waiting – waiting for links to index, waiting for domains to age, waiting for rankings to improve. While you’re waiting you can either obsess over each visitor to your site and each Adsense click you get, or you can start several other sites and get them on the same growth path as the first.

Think about it – would it make sense for a farmer to plant just one seed, and then sit and stare at it for months to make sure it grows?

Meanwhile, there’s a whole field of fertile soil being neglected and your competition is very much busy planting seeds all around you all the time.

Never let precious time pass without exploiting it fully. You’ll be elated because you’ll feel like you finally cracked the Google code; you’ve made it – you arrived. But then the site won’t make much. Maybe $3 to $5 per day…or maybe nothing.

But let’s say it does average $5 every day. Personally, I think a $5 per day site is something to be excited about when it’s part of a portfolio of ten similar earners. But if you invest 6 months into letting that one site ranked, and then another month or two watching it get to $5 per day, you’re going to be furious, and if you’re not then you should be.

Because in the same eight months you could have created ten or twenty – or even more – of those sites. And instead of making $100 per month online, you’d be making $1000 to $2000…or more (there are some newbies who earned more than $2,500 per month like it’s nothing).

Remember that $1,500 per month more than covers quite a few bills, doesn’t it? Heck, it can even pay off some debt if you want to. And will probably be the answer to your rent or the mortgage. Or…it could pay for a wonderful two-week family holiday every six months. Just imagine that!

By starting various earning sites, you have to be careful not to unnecessarily spreading yourself too thin. To avoid starting a bunch of sites and getting nowhere with them, here’s what I advise:

1. Find ten great keywords, buy the domains and start linking to them. Get them aging from day one.

2. Set up all ten domains on one hosting account. Go for a hosting company which is flexible enough and inexpensive. There are hosts that allowed you to link unlimited domains for less than eight dollars per month.

3. Install WordPress on all ten sites. Create one 300-500 word post (with a post title that contains your main keyword) for each site and publish it.

4. Get all 10 sites indexed by King Google. The fastest way to do that is to get a few links from other sites already in Google’s index.

So now you have ten sites set up, indexed by Google, and aging. What’s next? The next thing to do is build the one site with most potential to make money while waiting for others to age.

Choose the keyword with the most promise – the one with the least competition and the most profit potential. Once you’ve chosen your most promising keyword, aggressively build that site. Add ten pages of SEO-friendly content and start building links like crazy with the right anchor text.

After finishing the content on your first site, move on to another, write the content, begin building links and so on. After a few months, all ten sites will have content, some age in Google’s index, and lots of solid links.

Not long after your first site starts making a few dollars a day, the rest of your sites will catch up and you’ll be on your way to the passive internet income you’ve hoped for.

Therefore follow the path illuminated by the smart farmer…plant many seeds and get ready for the kind of harvest you always dreamed of.